T’ang Court takes its name from the dynasty that evokes in the people of China thoughts of halcyon days and lavish luxury. The T’ang Dynasty dominated the country from the 7th to 10th centuries, and among its hallmarks was a preoccupation with culinary innovation and extravagant feasts. A famous banquet in 768 was held in the honor of 3,500 military troops. Aristocrats drank water flavored with fruits and minerals, according to food historians, and emperors employed dieticians to ensure their health.

It was a Golden Age and T’ang Court brings the ambiance of gild to the 21st century, making diners imagine for a few hours at least that they might be emperors themselves.

A delicious cut of grouper swims in a broth of shark’s bone. It’s among the classic and elegant dishes on the T’ang Court tasting menu. At top, the dessert course includes (clockwise from top) black sesame tofu pudding, bird’s nest and mango jelly, and heart-shaped osmanthus tea jelly. (Adrian Brijbassi photos for VacayNetwork.com)

The restaurant is on the fifth floor of the Langham, Xintiandi, Shanghai, a five-star property in the ritziest district of China’s largest metropolis. Under executive chef Alan Sun, T’ang Court focuses on the classic flavors of Cantonese cuisine, sourcing ingredients from farms and fishermen in the far east of the country.

T’ang Court’s seven-course tasting menu begins with four distinct flavors and textures that preview the culinary journey to come. The chilled abalone is rich with sweetness, a contrast to the earthy marinated termitomyces mushroom with which it shares the plate. The crispy chicken and nibble of delicate Pacific cod completes the sublime opener. 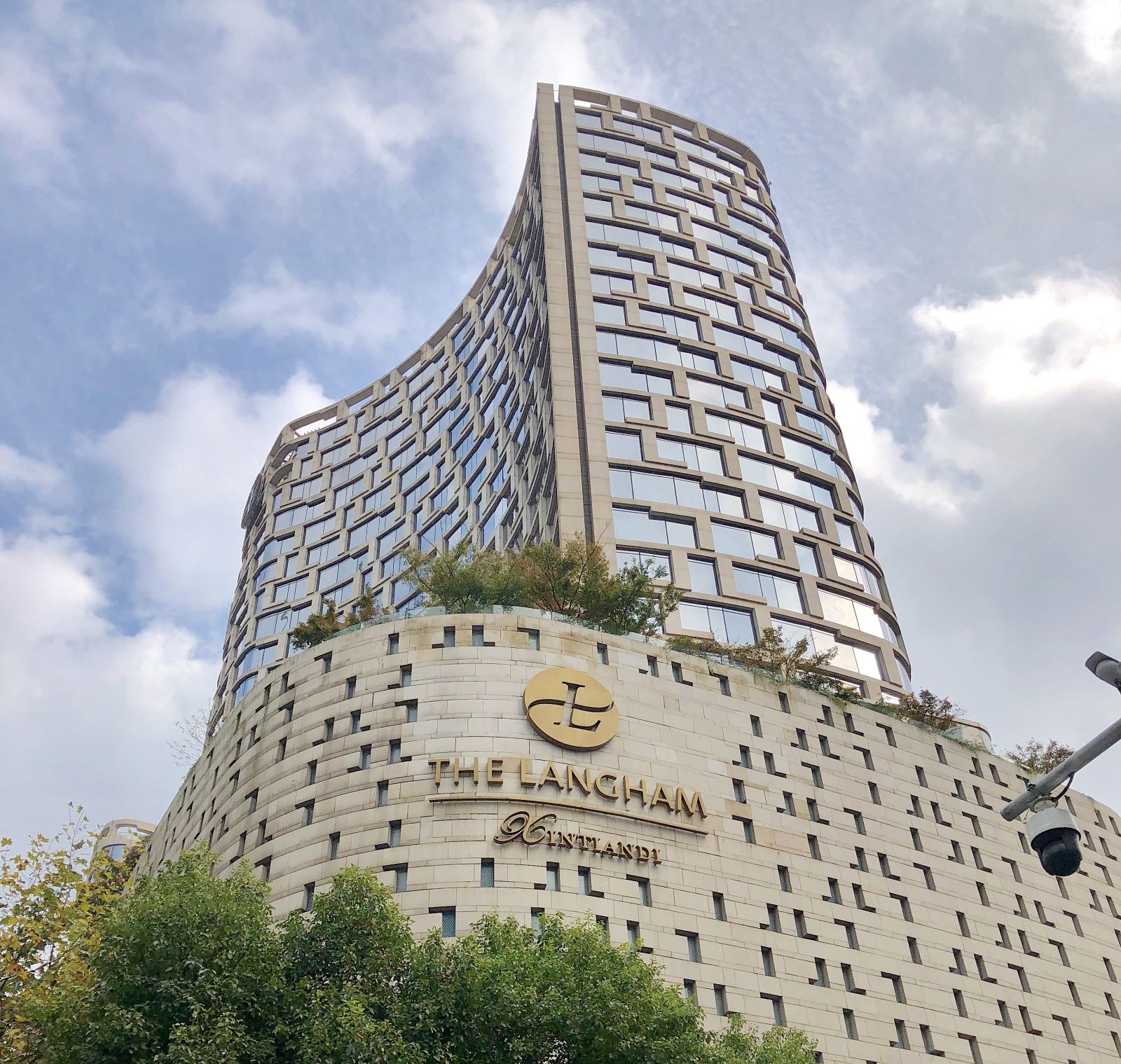 The Langham, Xintiandi, Shanghai is a luxury hotel in the city’s most upscale neighborhood. (Adrian Brijbassi photo for VacayNetwork.com)

That course is followed by a showcase of delights. Red lobster, braised and tucked into wonton-style morsels with minced sea urchin, swims in a savory red soup. Next, a slice of grouper is served in shark’s bone broth. The meal’s highlight for many will be the Wagyu beef course, served in a red pepper shell and seared tableside. The slices of beef are tender and precisely seasoned to meld with the pepper. The savoury courses end with a wild mushroom soup, and a classic bowl of Wok-fried rice made with beef and goose liver.

A refreshing finale is the dessert plate. The black sesame tofu pudding brings out the familiar taste of Chinatowns from around the world while Osmanthus tea jelly and a bird’s nest jelly with mango shows the creativity of Sun’s kitchen.

The menu is revamped seasonally, but there’s no doubt the flavors in dishes such as the seared Wagyu beef and braised red lobster will find their way onto the sheet. A large a la carte menu is also available and features several crab dishes as well as Kurobuta pork and even chilled jellyfish.

The restaurant, which has a sister establishment with the same name at the Langham’s Hong Kong hotel, has earned multiple Michelin stars in each of the past two years. Once the first bite hits your tongue you will know why the new golden age of China may not be so different than the last.

Din Tai Fung’s xiaolongbao (aka Shanghai soup buns) are considered by many critics and foodies to be the best in China. (Adrian Brijbassi photo for VacayNetwork.com)

If it’s not already the world’s most successful casual-dining restaurant, Din Tai Fung likely will be before too long. Decades ago, founder Yang Bing-yi fled the Communist regime in China, relocating from Shanghai to Taiwan. There, he ended up partnering with a chef in Taipei and together they created what many food critics have labeled the best xiaolongbao in the world. A few years ago, chef and author Christopher St. Cavish completed a thorough chronicle of Shanghai’s xiaolongbao scene and determined that Din Tai Fung is superior partly because the wrapper is thin (1.14 millimeters) and the weight of each bun is consistent. Din Tai Fung has developed xiaolongbao — also known as Shanghai buns, dragon buns, or soupy buns — with multiple flavors. The black truffle and chicken xiaolongbao may be the best comfort food I’ve ever eaten. Depending on the filling, the prices for xiaolongbao (which translates to “small basket buns”) range from 58-118 Chinese yuan (approximately $9.75-$19.75 USD) for an order of five. Din Tai Fung has about 70 locations in more than a dozen countries. Its locations in the United States are in California and Washington state. 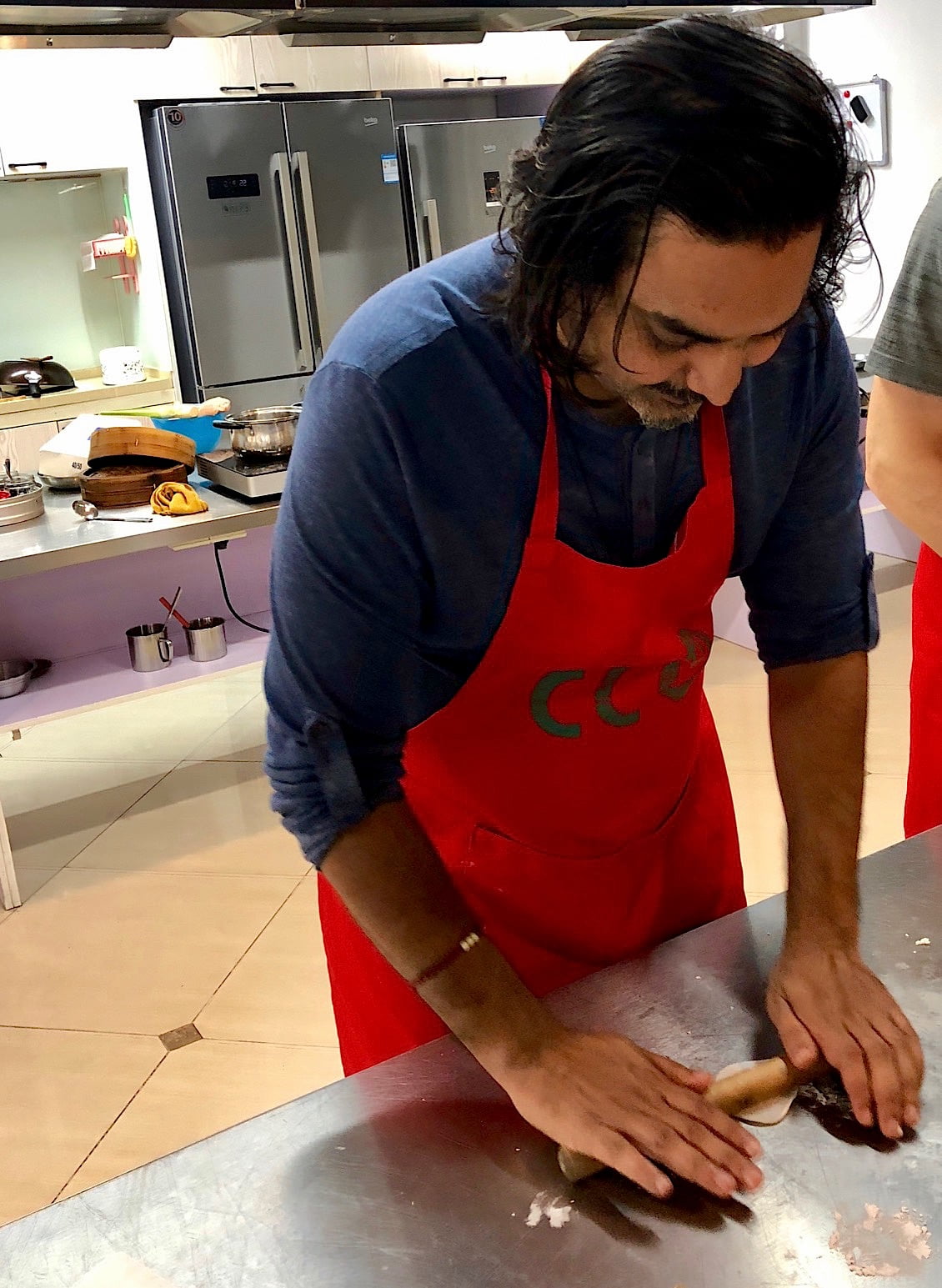 Once you’ve experienced xiaolongbao, you’ll be tempted to learn the mystery of how the soup gets inside the steamed bun. You’ll have the chance to find that out and do much more with a fabulous Untour experience that includes samples of the following: a pulled pork sandwich that’s dubbed the world’s oldest hamburger, traditional Chinese pancakes, wontons, potstickers, xiaolongbao, boiled dumplings, shui mai, steamed buns, and black sesame sticky buns. And that was before a cooking class where you are taught to make your own shrimp dumplings under the guidance of a Chinese chef at one of Shanghai’s cooking schools. It’s one of the more exceptional food tours you can find and costs a reasonable $85 per person.

One of the city’s more famous and trendy restaurants, Mr. & Mrs. Bund is located in the Bund 18 building, which is a destination in itself. The property includes its namesake luxury hotel, a branch of Le Salon De Thé de Joël Robuchon, extravagant Hakkasan, and notorious Bar Rouge, the Vegas-style rooftop nightclub that features incredible views of the Huangpu River and the city’s skyscrapers. Mr. & Mrs. Bund is one floor below Bar Rouge and diners can enjoy the thrill of staring out at one of the world’s great skylines. The Sunday brunch is a popular choice for culinary aficionados. It won’t disappoint. The scrambled eggs I thoroughly enjoyed were prepared with black truffle and served with a flat cheese crisp that can be stirred into the eggs. It’s inventive and addictively tasty. Executive chef Paul Pairet has established himself as Shanghai’s leading culinary star by bringing playful creations to the plate. His 10-seat Ultraviolet ranks among the World’s 50 Best Restaurants and has been dubbed the most innovative place to dine in the world by the UK Telegraph in 2017. Mr. & Mrs. Bund is far more accessible but ingenious in its own way.

LOST HEAVEN (locations in the French Concession and the Bund) 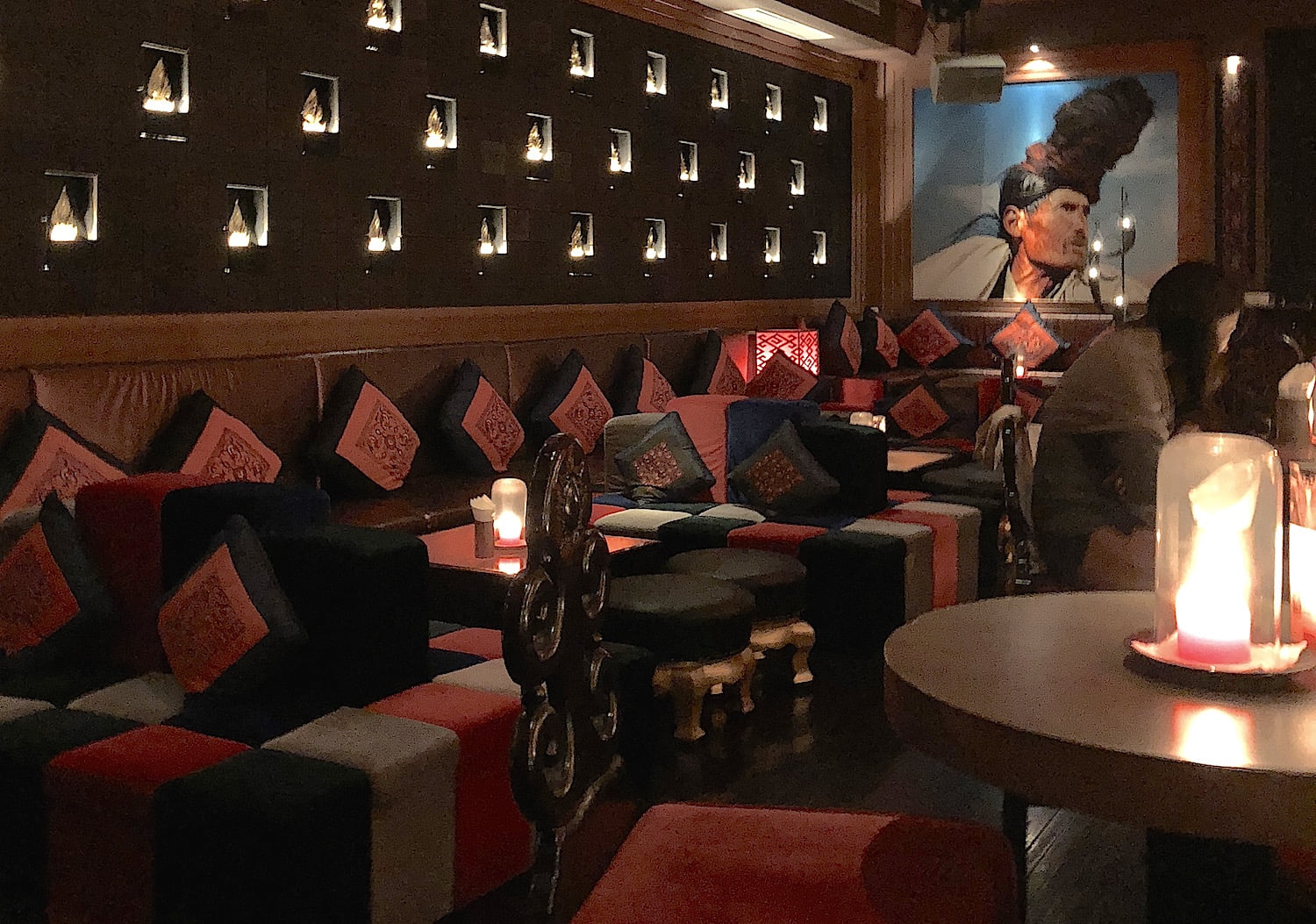 Although inspired by the flavors of southwestern China and Tibet, Lost Heaven would fit nicely in any western cosmopolitan city. The location in the Bund features a terrace bar and lounge that plays dance music while the restaurant space is dimly lit and decorated with paintings and accoutrements that evoke Yunnan, a province that borders countries such as Vietnam, Thailand, and Laos. With influences from those nations, the food is spicy, flavorful, and unique. For vegetarians or those who are craving greens (Chinese menus are heavily focused on meat and fish dishes), Lost Heaven is a savior. Its highlights include spicy tofu, stir-fried noodles with truffles, and vegetable bread. Meat lovers will want to try the lamb samosas. 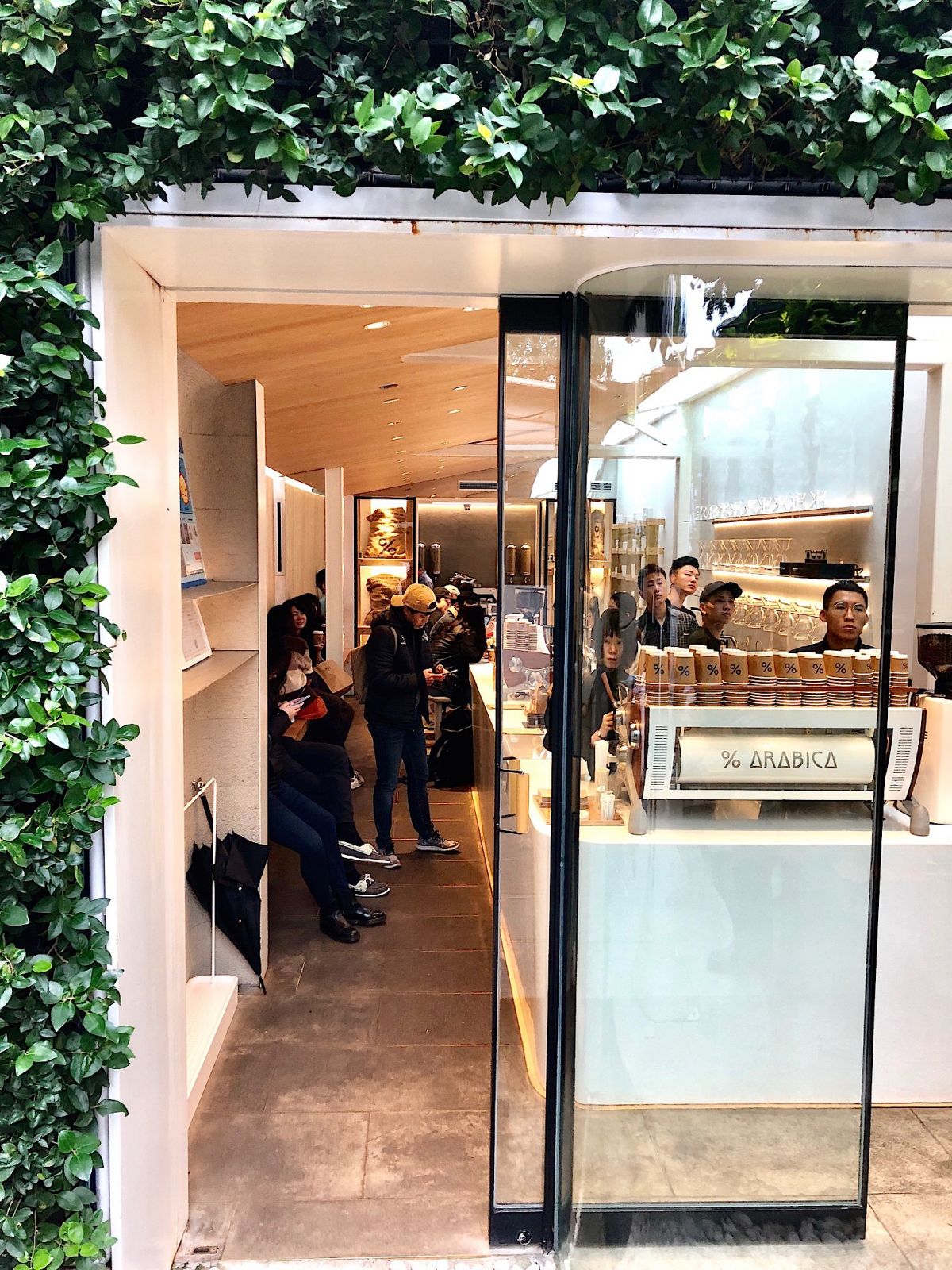 Arabica serves splendid coffee in a lovely setting in one of Shanghai’s prettiest spots. (Adrian Brijbassi photo for VacayNetwork.com)

There’s no shortage of quality coffee shops in Shanghai. For me, the best was Arabica, partly because of its location. It’s tucked away in a courtyard at the back of Ferguson Lane, a small and charming section of the French Concession that’s filled with boutique shops and cafes. Founded in Japan and now with locations in several countries in Asia and Europe, Arabica serves masterfully created coffee at prices that are competitive with Starbucks and other vendors. The Spanish Coffee is what impressed me.

Walk in LeBron's Shoes and Tour Los Angeles Like a King 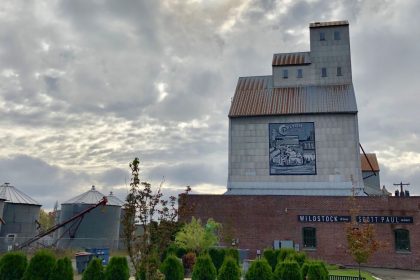 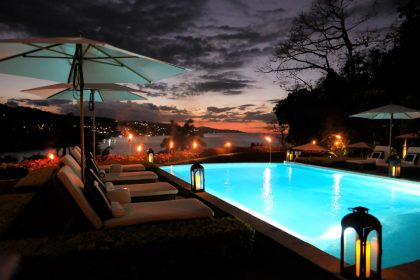