Scottsdale is a city with posh resorts, lush golf courses, and stores that carry regal names such as Neiman Marcus, Cartier, and Bulgari; a sun-splashed slice of heaven that most would-be visitors probably would add to the “great place for retirees” section of the questionnaire.

But as my wife and I look around the patio at a downtown spot called Diego Pops on a warm, cloudless day in February, we realize we’re the only people in sight who are clearly over the age of 35. The next table over is occupied by two women in their mid-20s who are flashing cellphones and taking glam shots of each other and their plates of tacos and Brussels Sprout Nachos, a specialty of the house. 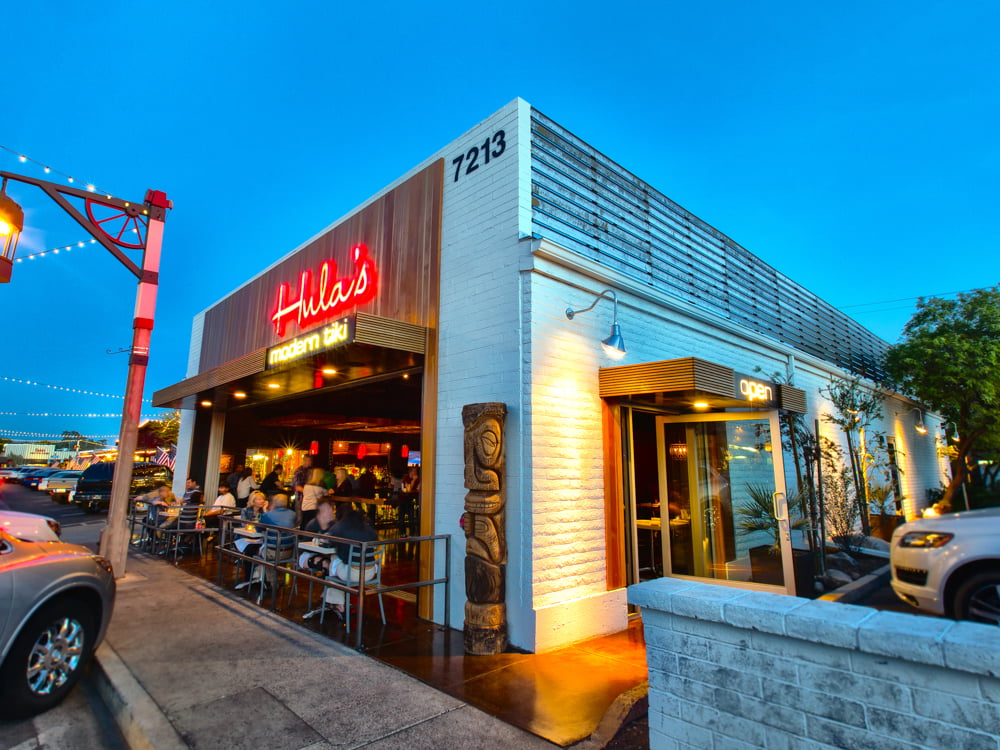 You know you’ve hit the desert when the open-air restaurant is spilling out with customers. Hula’s Modern Tiki is one of the fun spots in downtown Scottsdale. At top, Citizen Public House mixes beer, cocktails, and coffee in one contemporary location. (Photos courtesy of Experience Scottsdale)

The next morning, we pop into Farm and Craft for breakfast. There’s a cool, restored industrial look to the place and an Instagram-worthy interior, with blue letters on the wall that read, “All I want is food and affection.” It’s a beautiful space with a series of taps behind the cash register that dispense local beers, wine, kombucha, and cold-brew coffee. I opt for the breakfast burrito with scrambled eggs from cage-free hens, white cheddar, bacon and avocado, served with roasted tomatillo salsa, while my wife gets the avocado toast with egg whites on top and a kale smoothie with spinach, cucumber, apple, and lemon. Almost everyone in the place looks like they stepped out of a Lululemon ad.

Later in our visit we stop at Hula’s Modern Tiki for a taste of Hawaii in the desert. The macadamia nut-crusted mahi mahi and the “Jawaiian” pulled pork with Jamaican johnnycake and plantains are terrific, as is the Mai Tai (usually $8 but marked down to $6 for happy hour). We’re now in the habit of looking around to gauge the crowd, and we again find we’ve got to be the only people in the room who knew all the words to the songs sang by James Corden and that Paul McCartney fellow during a recent episode of Carpool Karaoke.

If you’re looking for peace and quiet and luxurious jewelry stores and western shops filled with visitors from Indiana and Idaho, you can find it in Scottsdale. But it’s also an increasingly hip and happening city with a vibrant downtown, where new condos are being built and where young people hang out at cool coffee shops and type out code for the next amazing app we’ll all be scrambling to download on our phones.

At Cartel Coffee Lab in downtown Scottsdale, they sell pretty bags of coffee beans from around the world, including: Banco Gotete from Ethiopia; Ngugu Ini AA from Kenya; and Santa Ana Decaf from Guatemala. They also have local beers on tap, including Stone’s Tropic of Thunder Lager and a McFate’s Cartel Coffee Milk Stout, so you can have your coffee and beer at the same time. Great for folks in a hurry.

Cartel features a blog from its coffee-bean buyer, Paul Haworth. One of the posts deals with the importance of the eco-system in El Salvador, while another talks about the ideal kinds of water to make the perfect cup of Joe. I don’t know if it’s the El Salvador beans or the clean water, but the tattooed barista behind the bar makes up one of the best coffee lattes I’ve had anywhere on the planet; thick and rich foamy; strong and then some, but with no bitterness.

Down the road at Sip Coffee and Beer House (seems to be a thing in this city for places that offer both), I stop in for another fabulous coffee latte and watch a room full of millennials and Gen X’ers talk about work and dating and hiking the local mountains, which are filled every morning with folks of all ages out for some glorious sun and a bit of a sweat. I duck out back to use the bathroom and find posters on the wall for open mic night, with a hashtag at the bottom that says #supportlocal. There’s also a poster for Salsa Night that advertises lessons for $10 and specialty cocktails.

Where to Stay in Arizona

Hotel Valley Ho is a glorious, mid-century modern hotel that was built in 1956 and draws a young crowd eager to embrace the “Mad Men” feel. The swimming pool is definitely one of the places to see and be seen in the city.

The property’s ZuZu restaurant is a snazzy spot with very good food and amazing desserts, including a series of milkshake inspirations called Showstoppers. For Valentine’s Day, my wife and I combined to eat a good one-quarter of a massive shake with white chocolate ice cream, bits of chocolate, and a piece of red velvet cake resting on a straw above the rim of the glass, which was coated with dripping ice cream and looked like a 10-year-old kid’s dream come true. 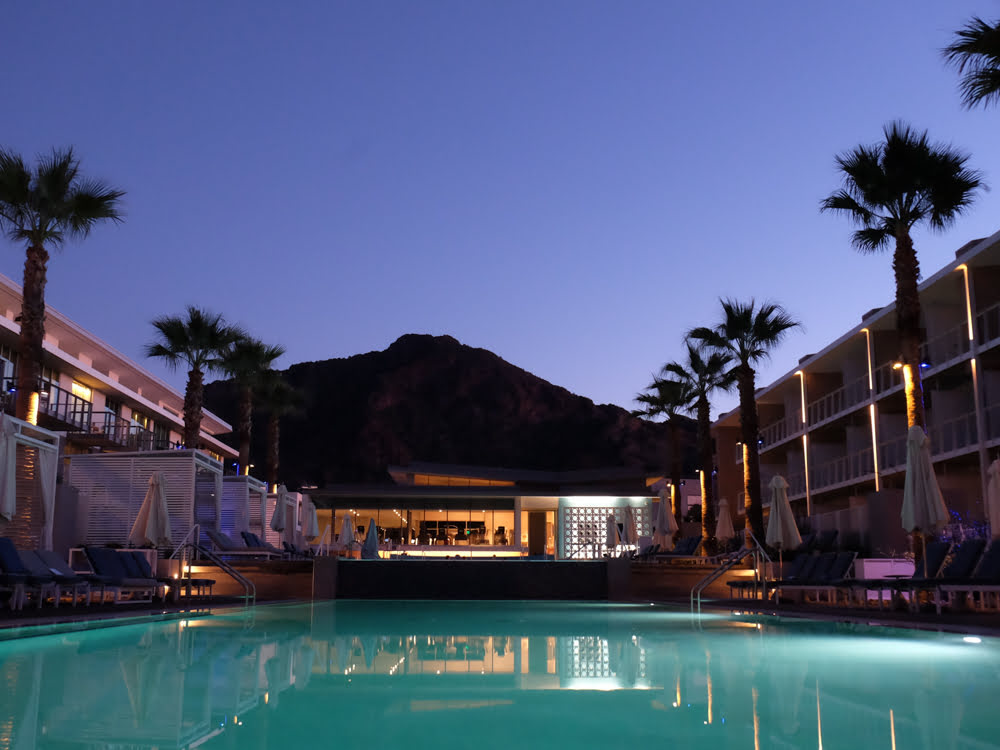 Mountain Shadows is a wonderful resort in Scottsdale, with a youthful vibe, great food, and fun cocktails. The pool set-up is particularly attractive. (Jim Byers photo for VacayNetwork.com)

Hotel Valley Ho’s owners also run Mountain Shadows Resort a couple miles north. It’s another property that attracted the cream of the Hollywood crop back in the 1950s and early ’60s. The hotel was closed for a while but re-opened less than two years ago. The rooms feature bare cement ceilings, quirky books on display and cocktail shakers and martini glasses. The goodies section in my room included local Zak’s chocolates and a green-blue lollipop with what looked like a scorpion inside. Try explaining THAT to the TSA folks.

There were no scorpions on the dinner menu at their restaurant, Hearth ’61. Instead, we had excellent California diver scallops and a remarkable short rib agnolotti dish with toasted bread crumbs for a wonderful crunch. The Big Easy cocktail is made with the property’s “3-man Blend Maker’s Mark Bourbon,” which hotel workers made on a visit to Kentucky, as well as St. Germain liqueur and Courvoisier. Yum and yum again.

The hotel sports a terrific swimming pool complex that shimmers at night and a wonderful patio with firepits and comfortable chairs and sofas. The décor is mostly gray, white, and black, with a few colorful bits tossed in and very little of the traditional Arizona look you find at some hotels in the state. To me, it feels more South Beach than Southwest.

And that’s something you can increasingly say about Scottsdale as a whole.

Sailing in Paradise and More Joys of British Virgin Islands 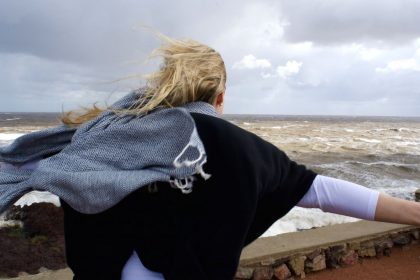 Uruguay’s Maldonado Coast Sweeps You Away With Beaches, Wine and Fun